The congregation of Second Presbyterian Church was organized on June 1, 1842 with 26 charter members, all of whom transferred their membership from First Presbyterian Church. Rev. Robert W. Patterson was ordained and installed as pastor. The first building, a modest frame structure at the southeast corner of Randolph and Clark, was dedicated in September 1843.

A larger building, known as the “Spotted Church” for its use of limestone containing bituminous tar deposits, was dedicated at the northeast corner of Washington and Wabash in January 1851. Designed by the well-known East Coast architect James Renwick, Jr., it was the first Gothic Revival structure in the city.

In 1856, the Lake Forest Association was formed by members of Second in the lecture room of the church. Three years later, Lake Forest Presbyterian Church was established.

Second Presbyterian merged with Olivet Presbyterian in September 1871 and plans for a new church south of downtown were drawn up. The last service at the “Spotted Church” was held on October 1, one week before the building was destroyed in the Great Chicago Fire.

Construction on the present building, also designed by James Renwick, Jr., commenced in 1872 and it was dedicated on July 7, 1874. The bell tower, containing a 4,101 pound bell by the Clinton H. Meneely Bell Company was added in 1884.

By 1894, nearly 2,400 members had been received into the congregation of which 800 were on the active rolls. The church established several mission churches throughout the city.

A devastating fire destroyed the interior of the church on March 8, 1900. Architect and church member Howard Van Doren Shaw was hired to redesign the present sanctuary. The rebuilt church was dedicated in November 1901 and the new organ, designed by Hutchins-Votey, was installed. The next month, Booker T. Washington spoke at the church; hundreds had to be turned away.

The neighborhood around the church underwent dramatic changes in the first decades of the 20th century. As the area continued to decline, many members moved to other parts of the city and the congregation considered relocating as well, but ultimately chose to remain and serve the ever-changing population.

The first African-American members were received in 1958 during the pastorate of Rev. Ernest Ackerman, who is memorialized with a bronze plaque in the sanctuary for his courageous leadership during this period. The beautiful bronze Celtic cross on the communion table was presented to the church by Rev. Ackerman.

Church membership dropped below 70 by the late 1960s, but the decision was made to keep the church open, and significant improvements were made to the building, which was listed on the National Register and designated a Chicago landmark in the 1970s.

Friends of Historic Second Church was organized as a separate non-profit in 2006 to oversee the preservation and interpretation of the art and architecture of the church. Several restoration projects have been completed since that time.

A major church capital campaign begun in 2008 raised the necessary funds for new boilers, windows, and other improvements.

Second Presbyterian Church is an anchor for the redeveloping South Loop. Its rich history, reflective of Chicago’s own history, combined with its landmark status, gives it a unique identity in the community. It accomplishes those essential things we expect from a landmark: it serves as an effective tool for community revitalization and provides a unique identity to the community. Because of Friends’ energetic tour program, the church welcomes visitors from all over the world who come to Chicago to see its world-class architecture and visit its revered institutions thus generating tourism revenue. Founded during the city’s infancy more than 170 years ago, the church becomes a tangible tool for teaching history as well as art appreciation. Friends’ preservation efforts coupled with the church’s care for the infrastructure of the building mean that the city’s historic, aesthetic and cultural heritage are safeguarded for present and future generations to enjoy and appreciate. 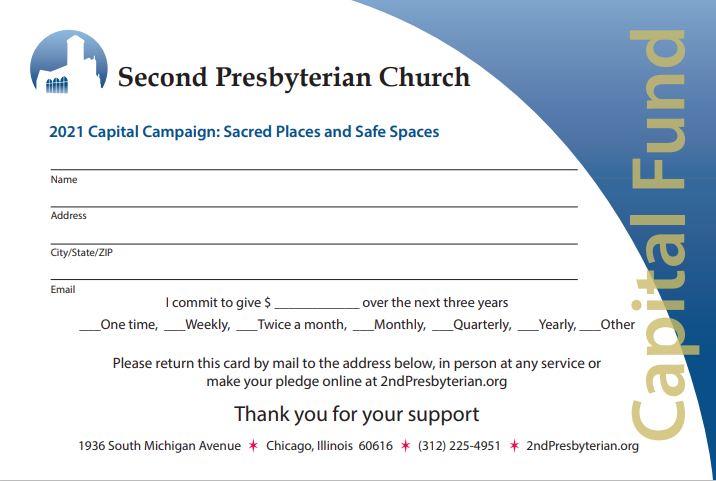